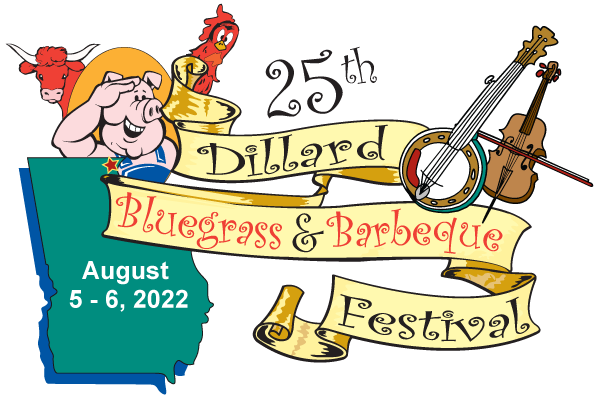 Twenty some years ago, an idea was hatched to bring some good food and good music together as a way of drawing folks into Rabun County and specifically the city of Dillard. The result was the beginning of the Dillard Bluegrass and Barbeque Festival.

It has become one of the southeast’s finest festivals, featuring the best cooks and the best bands from all over the country. We’ve even had cooking teams from England, and a band from Sweden. It all happens the first weekend of August at the annual Dillard Bluegrass and Barbeque Benefit Festival.

For a number of years, we included a barbeque competition sanctioned by the Kansas City Barbeque Society, which was designated in 1999 as the Georgia state championship cook off by resolution of the Georgia State Legislature. Teams that have competed in Dillard garnered points that help them on their way to qualifying for the KCBS Nationals. While we no longer host the competition, we will have several championship barbeque vendors serving the best of their craft. What a great way of tasting some of the region’s finest barbeque. Several other food vendors will be selling their specialties, too. We will also have cooking classes on Friday and Saturday presented by one of the best barbeque chefs around.

We have had some of the top bands on our stage over the years and as we are halfway through our third decade, we have more great entertainers lined up, including our featured band, Nick Chandler and Delivered. Some familiar faces on stage include Curtis Blackwell, the Foxfire Boys, C. F. Bailey and Shadow Ridge, and other bands that have been part of the festival for many years. We will have some newcomers this year, too! John Duncan, the “Asheville Fiddler”, who is himself a talented multi-instrumentalist, will bring his “string band” to add to the variety of Bluegrass styles featured.

We will have fun for everybody at the festival this year in addition to the music, with arts and crafts vendors, delicious food choices, kid’s activities and much more. Most everybody that comes likes our “small town” intimate feel, and many folks don’t know that we are a non-profit festival. We come together to have a good time, and in so doing we raise money for several local charities. Over the years, we have been able to donate well over $120,000. We couldn’t have done that without all the volunteer folks who come and help make it work, or our guests who come through the gate to support us. Thanks to all!

Visit our website at www.dillardbluegrass.org, and we look forward to having you visit a while.